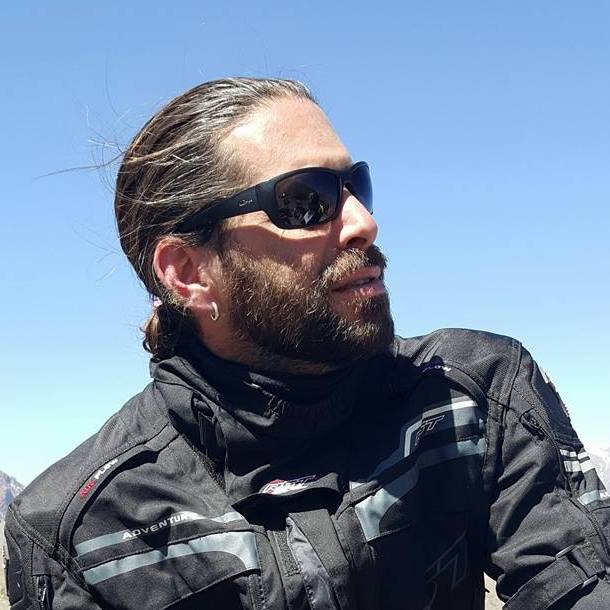 It all started way back in 2009 with the first official motorcycle tour Saar initiated and led through the isolated valleys of Spiti and Kinnaur in The Indian Himalayas, after travelling there with his own motorcycle long enough to know the region better than most locals (and even learn fluent Hindi). As legend has it, this young bloke, equipped with balls apparently, and passion most-definitely, set out an unforgettable three-week motorcycle adventure… with no less than 18 people in follow.

Why would these 18 people entrust themselves in such inexperienced hands you ask?!

Well… because to know Saar is to follow him. Rider, adventurer, explorer, geographer, director, producer, dreamer, storyteller, the life of the party (always the last man standing) and everybody’s friend.   A seamless and effortless combination of perfectionist meets optimist meets Mr. Joe Cool and towering at nearly 2 Meters tall with an UNCANNY resemblance to Jesus Christ.
Come on… wouldn’t YOU follow??

Since that first tour more than a decade ago Saar has made it his life’s work to personally hand-craft impeccable global motorcycle tours that are just as rich in nature and culture as they are in motorcycle touring. Relentlessly devoted to his holistic approach that EVERY DETAIL and EVERY MINUTE are all part of the experience (The Rides… go without saying), creating tours that are simply aimed to hit RIGHT IN THE HEART of EVERY BIKER!
A true “Sapirience”.

Oh…and all this while becoming a father to Ariel, Gal-Lavi, Libi & Zohar!
And YES! He’s married to Wonder Woman (Otherwise known as, Noam), and the kids… Ahhh, well, you guessed right….

Bottom line… you can be rest assured  that Saar not only creates ALL of our tours, but that he is leading ALL of them as well… even when he isn’t actually there 🙂